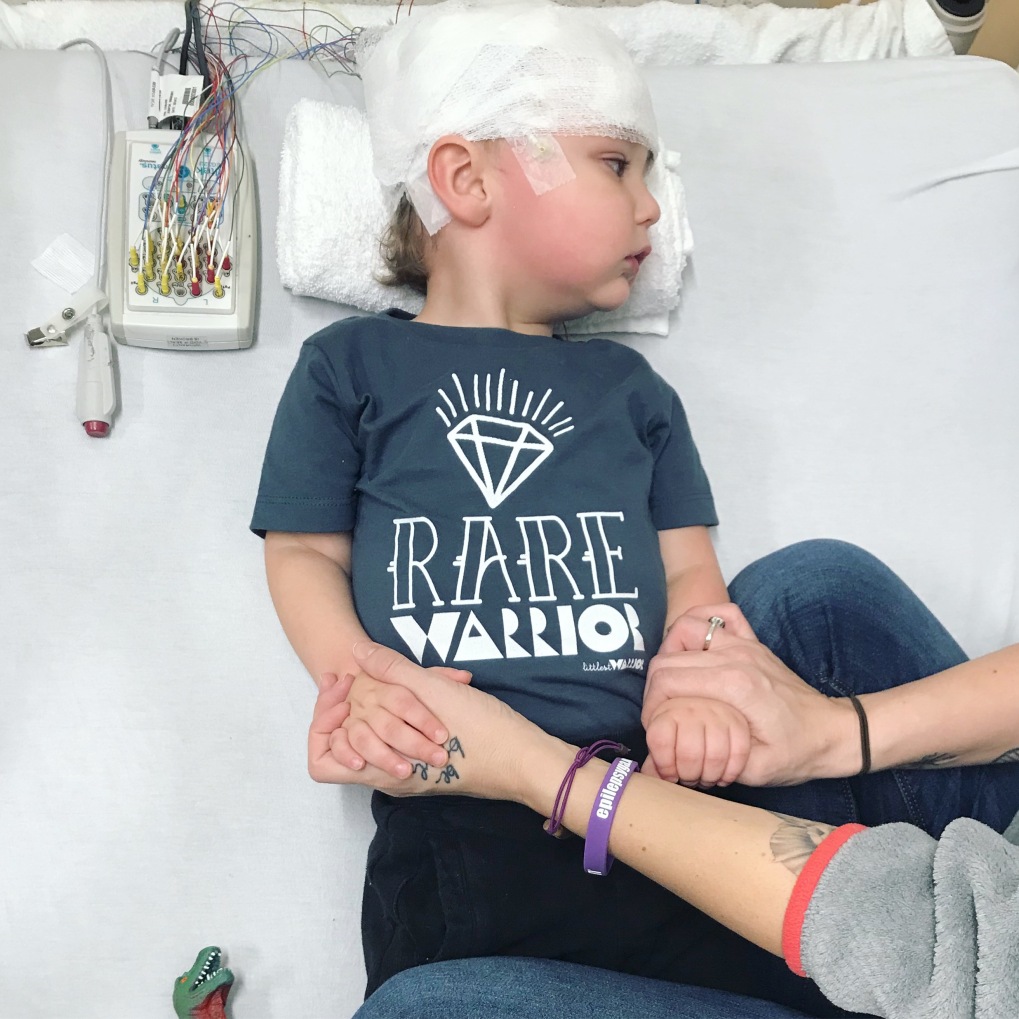 What does World Rare Disease Day mean to you? Have you ever even heard of it? Prior to having Jack, I didn’t even know there was a day dedicated to individuals who face the unknown daily. I say the unknown because that is basically what rare means; it means you will hear a lot of “we just don’t know yet” or “we have to wait and see”. Rare looks a a bit more medical than magical in the real world. But rare is also beautiful, right? That’s what all the cute unicorn tees tell us…in a field of horses be a unicorn or whatever. Of course rare is beautiful in so many ways, but it’s also lonely. What they don’t tell you is that once you have that unicorn or are that unicorn, you will no longer have that field of horses. All of the sudden you are exposed and alone all at once. It’s almost like you don’t really exist anymore because your life is too difficult to fathom. My 2.5-year-old son is my unicorn and he is the most incredible little buddy who also happens to have a rare genetic and metabolic disorder called Pyridoxine Dependent Epilepsy (PDE).

Before Jack I had no idea there were so many genetic disorders, so many rare disorders of all varieties. I try really hard to read and learn a little about each new disorder that I learn about through a social media photo, hashtag, or a meeting at an outreach event, etc. I think that’s one the best things we can do to show respect for the brave humans who fight these disorders daily. That being said, PDE is pretty confusing to most people. I understand pretty well because I have to, but here goes:

“Pyridoxine-dependent epilepsy (PDE) is a rare genetic condition characterized by intractable and recurrent neonatal seizures that are uniquely alleviated by high doses of pyridoxine (vitamin B6). This recessive disease is caused by mutations in ALDH7A1, a gene encoding Antiquitin, an enzyme central to lysine degradation. This results in the pathogenic accumulation of the lysine intermediates Aminoadipate Semialdehyde (AASA) and its cyclic equilibrium form Piperideine-6-carboxylate (P6C) in body fluids; P6C reacts with pyridoxal-5′-phosphate (PLP, the active form of vitamin B6) causing its inactivation and leading to pyridoxine-dependent seizures. While PDE is responsive to pharmacological dosages of pyridoxine, despite lifelong supplementation, neurodevelopment delays are observed in >75% of PDE cases. Thus, adjunct treatment strategies are emerging to both improve seizure control and moderate the delays in cognition. These adjunctive therapies, lysine restriction and arginine supplementation, separately or in combination (with pyridoxine thus termed ‘triple therapy’), have shown promising results and are recommended in all PDE patients.” —> This is the treatment plan Jack is on, but because he wasn’t properly diagnosed until almost 6 months old it’s a very “wait and see” outcome for him and most patients until there is more research.

So let’s talk a little bit more about our unicorns, our rare disease warriors, and what they mean to the world. I recently worked with a media team in the UK to share Jack’s story. They made a beautiful video that had the most amazing supportive comments attached. They also published a written article about Jack. I am always asked what my goals are or plans are going forward with advocacy? The interviewer asked me this question and I answered that my first goal is to help get PDE added to the newborn screening process! Cool, right? (I think so!) But of course there were a few ignorant comments that struck me on this one. Here are two of the comments (one kinder than the other):

1.) I sympathize with the anguish these parents went through, but I’m not sure it’s practical to test every baby for something so rare.”

2.) You want every newborn tested for one of the world’s rarest diseases??

When people ask these sorts of questions or make comments like this, I get so confused. Do they know what the newborn screening process is? It already happens to every child, a little heel stick. Why is it so crazy to also test that blood for PDE bio markers? IT COULD LITERALLY SAVE LIVES! It literally makes me cringe because it seems like people don’t even know what newborn screening is or why it’s done. These are people whose future children I could be advocating for, but they don’t care enough to (at the very least) not make a comment that they don’t even understand. I guarantee if these commenters had a loved one with a rare disorder then they would care about rare, or least empathy, a bit more. Maybe the article didn’t do a good job of explaining why I want PDE added to the newborn screening process, but that was not the purpose of the article. The purpose was to celebrate a very brave little boy and shine a light on a rare disorder to give hope to others.

I did not even know that PDE could be screened for in an infant since my son went almost six months with having a correct diagnosis. During this time, he suffered immensely and even has a brain injury due to late diagnosis. Jack’s geneticist is the one who brought to light the fact that there are PDE bio markers that can be tested in newborns, just as there are bio markers that are tested in Jack every 3 months. In addition, if you take Jack’s case along with much of the research, it is quite to clear to see that many PDE patients go undiagnosed or misdiagnosed. Maybe PDE isn’t even as rare as we think. We just don’t know, which is why awareness and advocacy is important to me. I was even told by Jack’s neurologist that before the gene associated was identified, many of the kiddos with PDE passed away because they were resistant to all typical anti-epilepsy drugs (AEDs) and go into status so easily. Many PDE patients begin having seizures in-utero just as Jack did (only we didn’t know at the time) so by the time they come into the world, they have already had tons of strain on their developing brains. PDE can be most closely related with PKU, the disorder already tested for on the newborn screening because early metabolic treatment is so necessary. PKU is still considered a rare disorder even though the incidence is much higher than PDE. If the brain development and overall outcome of your child depended on as early a diagnosis as possible, then you would care about newborn screening as well.

PDE, along with PKU and many other disorders, is known as an inborn error of metabolism. Diabetes is the most common form of metabolic disorder if that helps at all. Basically people with metabolic disorders are lacking something important needed to help their bodies/brain function properly. These disorders are quite cruel, many are progressive, and even more have no treatment. This is why we should care about rare. We should care about rare not only because we love our beautiful unicorns, but also because the reality of the rare life is a desperate and isolating one. I guess a sad unicorn doesn’t make as cute of a tee, though. Care about rare because it’s all around and because it’s worth making the effort to try to understand, connect, and offer hope to others. Advocacy, awareness, inclusion, and kindness are the best way to beat the comments and ableism that make rare as lonely as it is beautiful. 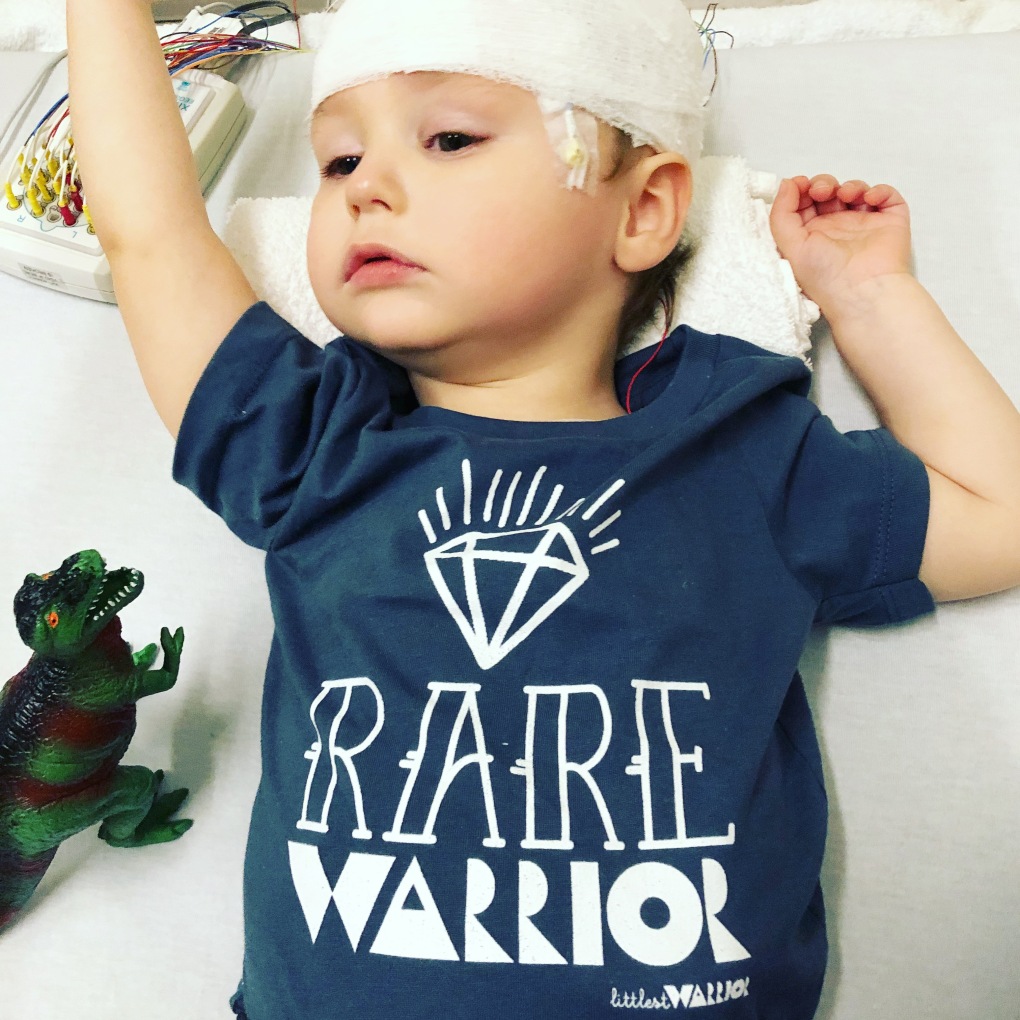